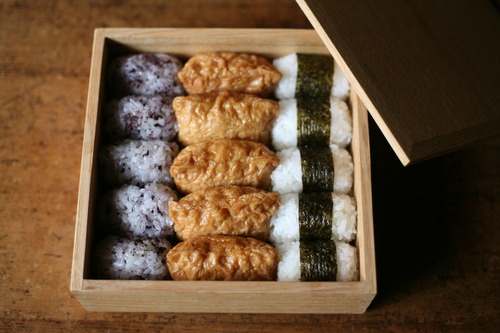 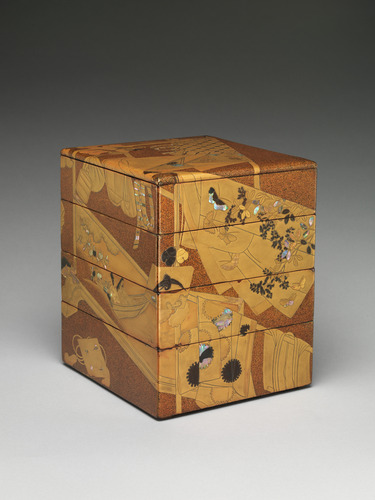 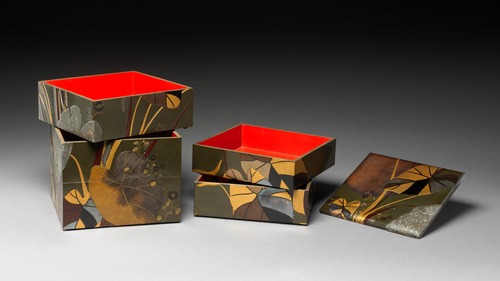 If you fill an entire tier with rice, it would be a feast in itself, wouldn't it? I filled one tier of the jubako with bale-shaped rice balls and sushi made with freshly cooked rice. The other tier is filled with my favorite side dishes, and I would love to go out to enjoy the autumn leaves as it is.

The jubako is often used as a lunch box during the holiday season or for home parties these days, but its history is quite old, with references to "jubako" already found in Muromachi period documents. The official form of the jubako is "four-tierd," representing the four seasons, so it can be said that this craft reflects the climate of Japan, which has four distinct seasons.

It was during the Edo period (1603-1867) that jubako became popular among the general public. While there were, of course, luxurious lacquered and maki-e lacquered jubako made by feudal lords and samurai families, simple jubako specialized for carrying around were also made at that time. This Shirakinuri Lunch Box from Matsuya Shikkiten is painted to maximize the grain, giving it a texture similar to that of plain wood, and is characterized by its practicality and natural look that can hold oily food.

The name "jubako" is derived from the idea of "piling up good fortune," or the wish for happiness. Whenever I see or hear this, I feel as if I am touching the beautiful souls of our ancestors, who put their wishes for people's happiness into even a single utensil.


Matsuya Shikkiten's Shirakinuri Lunch Box (*Sales will end when stock runs out due to difficulties in obtaining raw materials.)
https://www.shokunin.com/en/matsuya/