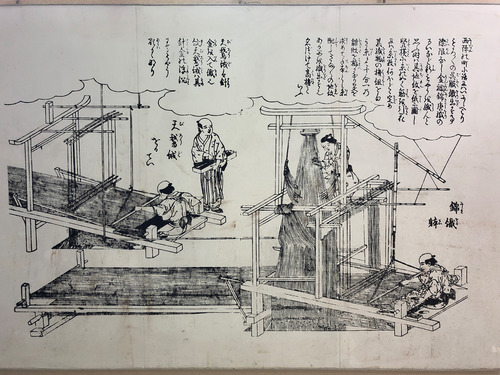 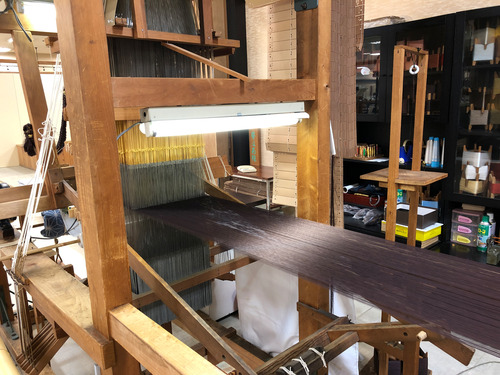 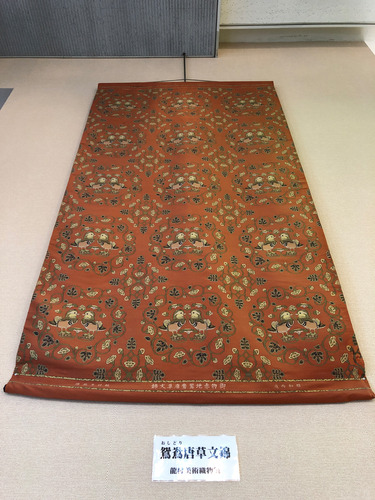 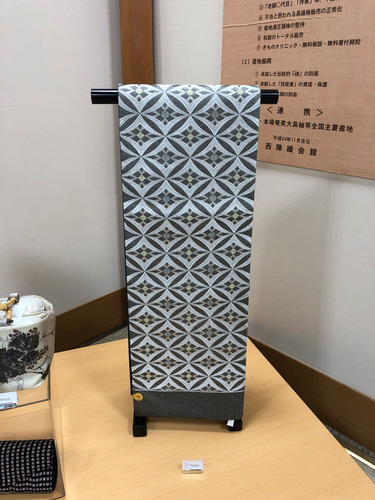 Nishijin textile is a generic name for fabrics produced in Nishijin, Kyoto, and is designated as a traditional handicraft by the national government. The name "Nishijin" comes from the fact that Sozen Yamana, who led the western army in the Onin War, established his camp here. Although there are no clear boundaries separating Nishijin, weavers engaged in Nishijin textiles are mainly located in Kamigamo in the north, Marutamachi Dori in the south, Karasuma Dori in the east, and Nishioji Dori in the west, mainly in Kamigyo and Kita wards.

The history of textile production in Kyoto dates back to the Kofun period, when the Hata clan, who came to Japan, introduced sericulture and silk weaving techniques in Yamashiro Province. After the Asuka and Nara periods, when the capital was moved to Heian-kyo, a government office called "Oribe no Tsukasa" was established under the Ritsuryo system to manage the textiles of the court. Located in Kamichoja-machi, Kamigyo-ku, present-day Kyoto, highly skilled craftsmen were assembled and were responsible for the production of high-grade textiles.

However, by the mid-Heian period, the Ritsuryo system had collapsed and it became difficult to maintain government-run workshops. Craftsmen therefore moved to the town of Otoneri, east of Oribe no Tsukasa, and shifted to a freer approach to textile production, away from the control of the court. They independently studied the techniques introduced from the Song dynasty (960-1279) and continued to make textiles for the nobility and for decorative purposes at shrines and temples.

During the Muromachi period (1336-1573), the Onin War broke out, and during the 11 years of warfare, many artisans fled to Osaka and other cities, leaving the textile industry in town of Otoneri in a state of ruin for a time. After the war ended, however, the artisans returned to Kyoto and formed a cooperative called "Otoneriza," which revived and developed the textile industry through friendly competition. Later, techniques and tools were introduced from Ming Dynasty China, and mon-ori, weaving colored patterns and designs using dyed threads, became possible, laying the foundation of Nishijin textiles.

In the Edo period (1603-1867), Nishijin textiles reached its heyday. The warring world was over, and people were seeking luxury and demand for clothing was rising. However, in the midst of this prosperity, a great fire, also known as the "Nishijin Burn," broke out. It consumed the entire Nishijin area in a few hours. In addition, repeated famines caused instability and reduced demand for kimonos, and the area suffered from a second major fire.

Then, when the capital moved to Tokyo, the Nishijin textile industry lost many of its customers and faced an even greater crisis than before. Under a plan by the Kyoto Prefectural Government, craftsmen from Nishijin were dispatched to France to embark on the blossoming of civilization. They brought back techniques such as jacquard weaving, which made mass production possible and enabled the early success of modernization.

Today, it occupies the highest peak of Japanese textiles, and its applications are not limited to traditional obi and kimono, but have expanded to include neckties, kimono accessories, interior goods, and more. The Imadegawa Showroom is located in the very heart of Nishijin, and nearby is the Nishijin Textile Center, where you can experience the charm of Nishijin textiles. Please stop by.