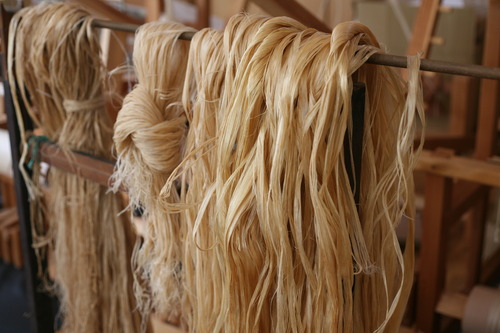 Linen is an annual plant of the flax family. The fiber from the ligneous bark of the plant is called flax, and yarn or cloth made from flax is called linen. Linen is said to be the oldest fiber known to mankind, having sprouted in the Tigris-Euphrates River, the cradle of world civilization, in 8000 BC. In ancient Egypt, linen was called "woven moonlight" and was used in rituals. The cloth used to wrap ancient Egyptian mummies was also linen. From the Caucasus to the Middle East, China, India, and Japan, linen entered Europe during the Meiji period (1868-1912) and was used for Western-style clothing and became widespread.

Hemp is an annual herb in the mulberry family. It is thought to have originated in Central Asia, with its current main production areas being China, Russia, and Romania. It was discovered in shell mounds belonging to the early Jomon period and, like ramie, is said to be the oldest naturalized plant, having come from China before the spread of cotton. Hemp is originally called "oonusa" and refers to a tool used in Shinto rituals for purification. The word "nusa" originally referred to cloth, and "oo" was a term of endearment meaning "splendid." Cloth, which was precious in ancient times, was an offering to the gods and was also called "oonusa," and is the stick wielded by the Shinto priest at shrines during purification ceremonies. It is made of paper called shide, a cord of hemp fiber called asao, and a wooden stick such as sakaki. The sacred amulet of the Ise Jingu Shrine is called "Jingu-taima," and this "oonusa" is the origin of its name. It is distributed through shrines all over Japan, and is the talisman of Amaterasu Omikami, the Ujigami of Ise Jingu Shrine, who protects all of Japan.

Okai Mafu Shoten was founded in 1863 as a weaver of Nara Sarashi. Nara Sarashi is a luxury fabric made from hand-piled and hand-spun yarn, woven on a traditional handloom, and bleached several times to a pure white color. Because of its pure white beauty, it was a major product of the Nara region during the Edo period (1603-1867), and was used as a luxury item by the Tokugawa shogunate for samurai families and townspeople. We invite you to see, hold, and use these precious and beautiful traditional crafts that have been handed down to the present day.