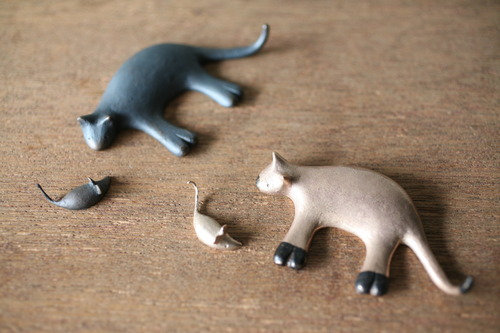 The cat is an animal that is very familiar to us. It is said that their ancestors were small tree-dwelling animals called miacis. In the course of their subsequent evolution, those that remained in the forest and hunted alone evolved into cats, and those that moved to grasslands and lived in groups evolved into dogs.

The origin of their relationship with humans was when they were bred for the purpose of exterminating rodents when humans began farming. For this reason, in Europe and China, they are considered to be spirits of the ear of rice, and the Chinese character for cat is written "苗" in the beast version, which also indicates this.

At a site dated around 8000 B.C., a cat was buried very close to a human, making this the oldest known trace of human-cat relations. By around 3000 B.C., cats had established themselves as partners of humans, and in ancient Egypt they were the subject of wall paintings and sculptures, and were mummified and buried with great care. From Egypt, cat keeping spread to Europe and Asia, where they protected grain and books and played an important role during the plague epidemic.

Cats were also found in ancient Japan, but it was not until the Nara period (710-794) that they became fully involved with humans. With the arrival of Buddhism from China, cats were brought to Japan to protect scriptures and other items. Since cats were rare creatures, they were kept only by people of high rank.

Emperor Uda is said to have kept a black cat given to him by his father, and Emperor Ichijo was such a cat lover that he named his cat "Myobu no Otodo" and gave it a rank. Later, in the Edo period (1603-1867), cats remained rare and precious, but they were depicted in ukiyoe woodblock prints and Japanese paintings, indicating that people were familiar with cats.

The relationship with cats spans thousands of years and shows that they have been closely connected to human life. Cats are creatures that have captured the hearts of people both now and in the past.