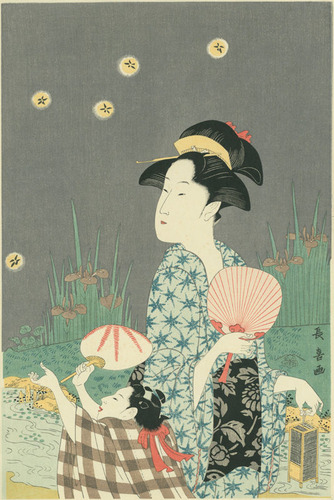 Yukata is said to have originated in the Heian period (794-1185), when aristocrats wore a kimono made from hemp called a yukatabira when taking a steam bath. At that time, the baths were steam baths, and yukata served the purpose of preventing burns from the steam, removing perspiration, and concealing nakedness. Later, during the Kamakura period (1185-1333), bathing attire changed to "fundoshi" underwear for men and "yumoji" which resembles a rolled skirt for women, and by the Azuchi-Momoyama period (1568-1600), people began to bathe naked.

In the Edo period (1603-1867), sento (public bathhouses) became popular among the general public. As people began to visit public bathhouses, they began to wear kimonos after bathing that were well-ventilated and absorbed sweat, and these kimonos came to be called yukata.

As a remnant of this tradition, yukata are provided at onsen ryokan (traditional Japanese inn or hotel). Today, only a few people wear yukata at home, and the comfortable yukata has taken root as summer outwear. They are especially worn as attire for summer events, such as festivals and fireworks displays.

For Japanese who used to wear kimono, yukata has become popular as everyday wear for relaxing and enjoying the cool of the evening. Since it is worn on bare skin, the cotton fabric is absorbent and can be worn as a nightgown. Originally, yukata were not meant to be worn outside. However, since the Edo period, yukata have been accepted for going out as long as they were worn in the evening or later in unpretentious places.

Today, yukata can be worn not only in the evening, but anywhere as long as it is not a formal occasion. In Kyoto, for example, yukata can be rented for a reasonable price, and visitors can enjoy sightseeing while wearing a yukata. You can also buy an old yukata at an antique store to make your trip even more memorable.

If you have a favorite yukata, why not choose a comfortable time and place and plan an outing in a yukata? A yukata does not suit very large luggage. Therefore, it would be nice if you match a small basket or bag with your belongings in Japanese style when you go out.

Nitomi's Tie-Dye Gamaguchi are semi-custom-made, allowing you to choose the tie-dyed fabric and the lining fabric of your choice. You can enjoy coordinating them with your favorite yukata or with a color scheme to add a touch of color to your favorite. The delicate multi-colored kanoko shibori (spot tie-dyeing), its unique soft touch, and its rounded shape are also important points. Since each piece is handmade after receiving an order, the time spent waiting for the finished product is also special for you.