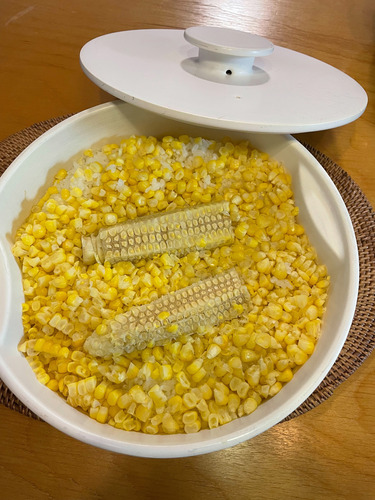 There are many new things we have learned and many things we still don't know about the nutritional benefits of foods and how to prepare them. For example, burdock root skin is effective in preventing the accumulation of fat, and when the skin is peeled or the scum is removed, the nutrients and fiber are also washed away, which is a waste. To increase these nutrients, broccoli has nutrients that have antioxidant and cancer-preventive properties, and to increase these nutrients, broccoli should be cut off the stem and left for 4 or 5 minutes before heating to produce more nutrients. And apples, which are full of nutrients even around the seeds, are cut into star-cut rings so that you can eat the skin as well, which means you can take in all the vitamins E and C and fiber...the list goes on and on.

This year, why not make a simple soup with corn kernels in a broth, seasoned with salt and pepper, or corn soup with the kernels in a blender? Corn tea made by slow-cooking the kernels is also a popular diet tea. I have made corn rice cooked with the kernels as well. The soup stock and gentle sweetness is extracted from the kernel, so it is delicious with just salt and sake seasoning. Ceramic Japan's do-nabe L can cook 3 cups of rice without spilling. Even a little bit of roasted rice can be washed without sticking to the surface. Unfinished rice can be made into grilled rice balls the next morning. Corn is in season, so let's make the most of it and get through the summer.