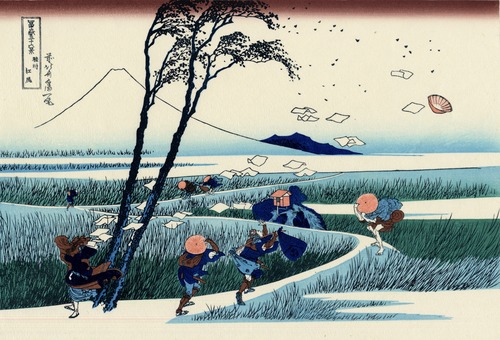 Washi is indispensable in unraveling Japanese culture, including ukiyoe, books, and scrolls. What kind of history has it had?

It is believed that paper-making technology was introduced to Japan around the 5th to 6th century. A little more than 100 years later, in 701, when the Taiho Ritsuryo law established a department called "zusho-ryo," domestic production began in earnest. The library was responsible for the compilation of the Kojiki and Nihonshoki, and for the production and procurement of the paper needed for these works. As an affiliated institution, the kamiya-in, which specialized in paper-making, was placed under its umbrella to carry out paper-making. In addition, as Buddhism was spreading during this period, demand for paper for sutra copying also increased.

Later, when the capital moved to Heian-kyo, the business of kamiya-in expanded, and the technique of nagashi-suki, a paper-making method unique to Japan, was established. The main characteristic of nagashi-suki is the addition of mucilage from a plant called "neri" to a mixture of raw materials such as kozo (paper mulberry) and gampi and water. A strainer lined with a bamboo screen is used to pump up the liquid and rock it back and forth until it becomes thick enough. Until then, paper was still a precious commodity, and wooden writing strips were used in daily life, but nagashi-suki made mass production possible, and Japanese culture using washi, such as picture scrolls, literature, and poetry anthologies, flourished.

With the establishment of paper-making techniques, production began to take place not only in kamiya-in but also in manors throughout the country. Then, the kamiya-in ran out of raw materials, and so they used Japanese paper to make paper. However, it was no longer possible to remove the ink from the original paper, and all the re-made paper was finished in a light ink color, and they were called "Kamiya-gami. However, since it was not possible to completely remove the sumi ink from the used papers, all the re-made papers were finished in a light sumi ink color, and they were called "kamiya paper."

Once a government-run paper mill, kamiya-in was responsible for the production of high-grade paper, but it fulfilled its role of spreading paper-making technology and was abolished during the Nanbokucho period. As the changing times broadened the paper consumption base from court nobles and priests to warriors, thicker, more practical and durable paper became more sought after than the glamorous thin paper. Especially valued by samurai warriors as a gift, it became common practice to wrap high-grade sugihara paper with mizuhiki (a type of paper used for gift-giving) and to give it collectively, and the custom of wrapping gifts in paper also became established as an origata etiquette.

In the Edo period, paper finally spread among the general public and came to be used in various settings, from chirigami (dust paper) to fixtures. Among these, the development of the publishing culture, including ukiyo-e prints, greatly increased the demand for paper, and clans stepped up production. The spread of paper-making using new materials such as mitsumata plant, in addition to the previously dominant kozo and gampi materials, also contributed to the increase in production. In the Meiji period, when paper made from pulp was imported from Europe and the United States, traditional Japanese paper came to be recognized as "washi (Japanese paper)." From the late Meiji to Taisho periods, when mass printing of newspapers and books began in earnest, western paper, which was compatible with printing presses and ink, became widely used in society.

Washi, on the other hand, established a unique use for its excellent durability, which is said to last for more than 1,000 years, and its soft texture made of long intertwined fibers. New ways of using it in modern life are continually emerging, such as in the restoration of cultural assets, as a material for banknotes, and in recent years, for use in general merchandise and interior goods.