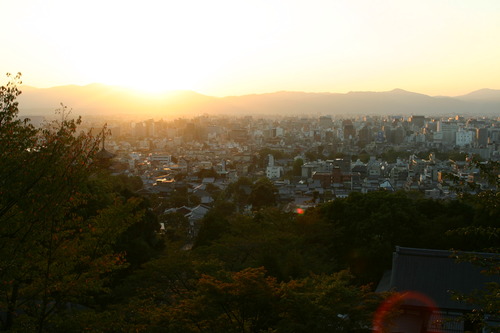 In Kyoto, there are several place names with the letter "guchi" such as Kuramaguchi, Tambaguchi, and Kojinguchi, which are called "Kyoto's Seven Entrances" and were once the entrances and exits to the Heian-kyo Capital.

The word "guchi" has been used to describe the entrances and exits of Kyoto since the Kamakura period, and in the Muromachi period, the shogunate and the Imperial Court established a barrier called "Shichikuchi-no-Seki" at the entrances connecting Kyoto to the seven provinces of the Kinai region and began to collect tolls. When Toyotomi Hideyoshi built the Odoi surrounding the center of Kyoto as part of his urban remodeling of the city, he also established seven gates.

However, even the number and location of the seven gates varied with the times, sometimes six or ten. Here we introduce what is represented in modern times as the "Kyoto's Seven Entrances."

Nagasakaguchi:
It was located near the beginning of the ascent of Nagasaka Pass, which led to Sugisaka over Kyomi Pass, and from there the road continued to Shuzan and Wakasa.

Kuramaguchi:
Located on the west side of the Izumoji Bridge over the Kamo River, it connected it with the Kurama Highway leading to Kurama. The Kurama Kaido was used as a route for worshippers to Kuramadera Temple, and also supported logistics between Niwa and Wakasa.

Oharaguchi:
Located on the west side of the Kawaramachi Imadegawa intersection, it was the entrance to the Wakasa Kaido road leading to Kutsuki and Wakasa via Yase and Ohara.

Kojinguchi:
Located on the west side of the Kawaramachi Dori Kojinguchi intersection, it is the entrance and exit of Yamanaka Pass from the Kitashirakawa River to Lake Biwa. The name "Kojin" comes from the fact that Sanbo Kojin is enshrined in Gojo-in Temple.

Awataguchi:
Located on the west bank of the Sanjo Ohashi Bridge, it is also called Sanjoguchi. It was a strategic point connecting to Tokaido Highway, Nakasendo Highway, and other roads. The name "Awataguchi" remains near Keage, and the Awataguchi school, a famous family of swordsmiths, derives from the name of this place.

Tojiguchi:
This is where the Rashomon Gate once stood, and is the entrance and exit of the Saigoku Kaido Road heading west via Yamazaki and Nishinomiya, and the Toba Kaido Road heading towards Yodo via Toba. For this reason, it is also called Tobaguchi.

Tanbaguchi:
The entrance and exit of the San'in Kaido road from Kameoka to Tamba, which bears the name "Tambaguchi Station" on the JR San'in Honsen line. The former entrance/exit was located at Senbon Dori Shichijo Agaru, but is now located on the south side of Gojo Senbon intersection.

Each of these places must have had a special meaning to the people who entered Kyoto after a long journey. Even places that we pass by without thinking about them have a long and storied history.