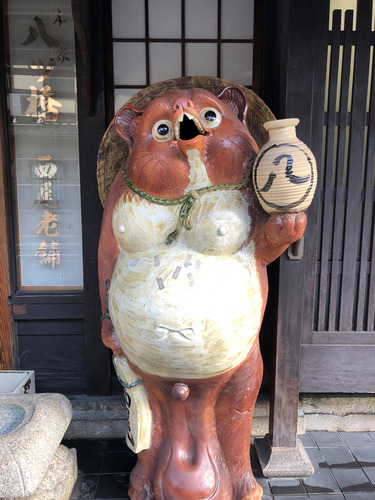 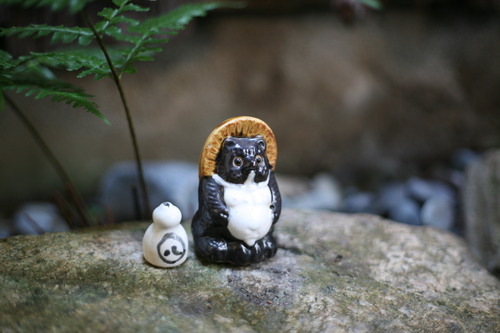 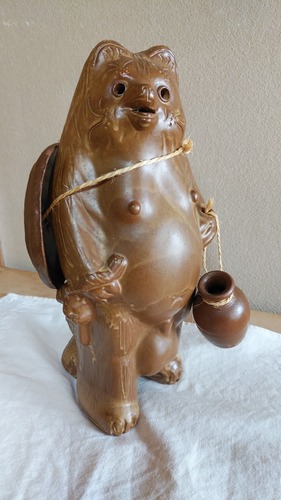 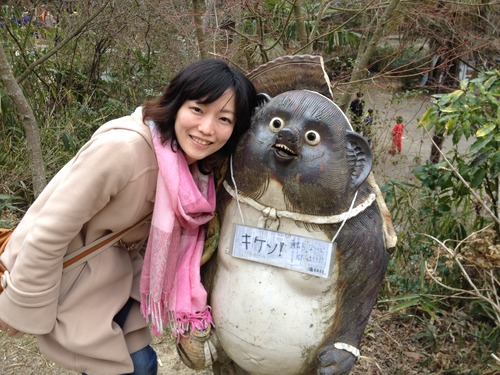 Shigaraki ware is the general term for pottery produced mainly in Shigaraki, Koka City, Shiga Prefecture, and, like Bizen ware and Tokoname ware, is one of the "Six Old Kilns of Japan," a group of six production centers that have continued to produce pottery from the Middle Ages to the present.

Blessed with abundant raw materials from the mountains south of Lake Biwa, Shigaraki, which has developed as a transportation hub since ancient times, produced large jars and pots influenced by Tokoname ware in the 13th century and daily necessities such as unglazed mortar in the 15th century. Since around the 19th century, the pottery has been used in a wide variety of products, including earthenware bottles, brazier, and building materials.

When people think of Shigaraki, they think of that unique and cool looking Shigaraki ware of a tanuki (racoon dog). Then, how did the composition of "Shigaraki = Tanuki" come about?

Tanuki were produced in various parts of Japan as tea utensils such as "tanuki incense containers" as far back as the Azuchi-Momoyama period. On the other hand, Shigaraki ware tanuki originated from an episode in which Tetsuzo Fujiwara, a potter who had trained at Kiyomizu-yaki pottery in Kyoto since childhood, heard the sound of drumming coming from the mountains and quietly approached the pottery to witness raccoon dogs drumming their bellies under the moonlight. Around 1935, Fujiwara moved from Kyoto to Shigaraki in response to a request to make large earthenware jars, but he received a prophecy in a dream that he should make tanuki, and he began to devote himself to making tanuki ornaments.

In 1951, when the Emperor Showa traveled to Shigaraki, tanuki carrying the flag of the rising sun were lined up along the roadside as a gesture of hospitality unique to a pottery production area. Emperor Showa was very pleased to see the scene, and his poem about the Shigaraki tanuki was reported nationwide, making it instantly famous. The raccoon dogs, known as "welcome tanuki," look somewhat dignified and poised in the photographs.

There was a time when Shigaraki tanuki were made with a realistic appearance reminiscent of the wild, but over time improvements have been made, leading to the adorable character-like style we see today. Each of the distinctive parts, such as the large hat, charming smile, and tokkuri, is associated with the "Shigaraki tanuki hasso engi," or eight-phase auspiciousness of the Shigaraki tanuki, invented by Gocho Ishida, a monk of the Tendai sect of Buddhism.

Kasa: To prepare yourself on a regular basis to avoid unexpected calamities.
Eyes: To be aware of your surroundings and make the right decision.
Face: To be affectionate and honest with each other.
Tokkuri: To eat and drink enough to acquire virtue.
Tori: Trust comes first in the world.
Belly: To be calm and bold.
Money bag: For good luck with money
Tails: All's well that ends well

Tanuki is also widely loved as a lucky charm for outranking others, prospering in business, getting ahead in life, and improving one's financial fortune, due to its meaning of "outrunning others." A small Shigaraki ware tanuki welcomes customers at the entrance of our Imadegawa Showroom as well. Please have a look at the adorable tanuki when you stop by.