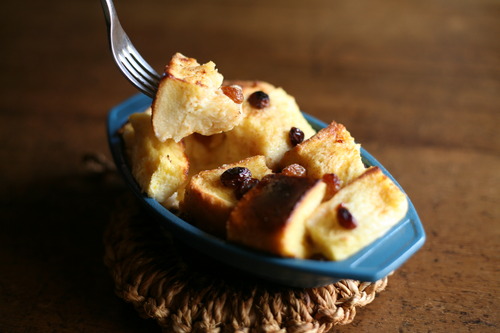 [Bread Pudding Made with Toy Gratin]

If you have just one piece of leftover bread that has seen better days or a baguette that has gone a little tough, how about an easy-to-make bread pudding?

Bread pudding is relatively famous mainly in Western Europe, Latin America, Canada, and in the United States in the South, such as Louisiana.

For bread pudding for one person, soak a slice of bread in a mixture of 1 egg, 1/2 cup milk, and a little sugar for about 5 minutes, transfer to a heatproof container, and bake in the oven or toaster until the bread is browned.

Rum raisins or bananas can be added to accentuate the flavor. It is delicious enough as is, but you can serve it with maple syrup, honey, cinnamon powder, etc., if desired.

Hasami's Toy Gratin, made in Hasami-cho, Nagasaki Prefecture, has an eye-catching pop design in six vivid colors. This is a discontinued product and all colors are only available from stock. It is a reasonable size, just right for bread pudding for one person or gratin as a side dish. If you would like to purchase one, please consider it as soon as possible.