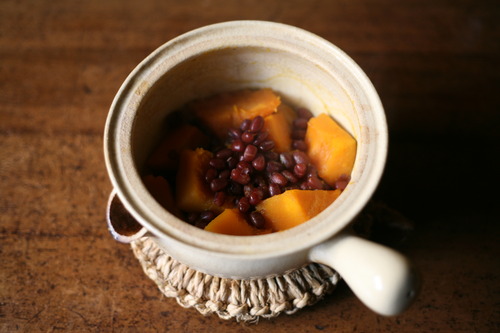 The winter solstice this year was on December 22. The 24 solar terms is a calendar that divides the seasons of the year based on the operation of the sun, with night as yin and day as yang. The winter solstice, when the night is the longest in the year, is the ultimate point of Yin, and from this day on, the daytime when the sun is out becomes longer and more Yang. In ancient times, the day was celebrated as the "return of spring." It means that winter is over and spring is coming, that good fortune will open up after a series of bad things. Because it is the turning point of the seasons, there was a time in the Mesopotamian civilization and the ancient Chinese calendar when the winter solstice and around it was considered the beginning of the new year.

It is believed that luck rises after the winter solstice, so eating pumpkin to nourish the body and taking a yuzu bath to warm the body for good health is considered to be an ancient wisdom to survive the winter.

Although pumpkins are harvested in summer, it is thought that they were eaten during the winter solstice, when vegetables are scarce, because they were a vegetable that could be stored for a long time. There is also something called winter solstice porridge. It generally refers to azuki porridge eaten on the day of the winter solstice, and the red color of the azuki beans has been considered a lucky charm to ward off evil and bring luck.

A classic macrobiotic dish, azuki pumpkin, is a traditional food for medical treatment of kidney dysfunction, diabetes, and swelling. It is a simple dish in which azuki beans are boiled and cooked, then pumpkin is added and seasoned. The simple and delicious azuki pumpkin stew is cooked in Matsuyama Tokojo's Yukihira Pot. Why don't you try making them next winter solstice?