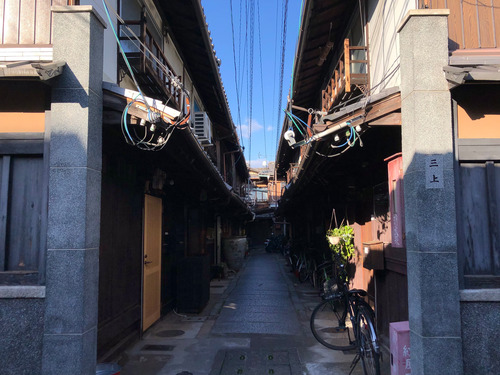 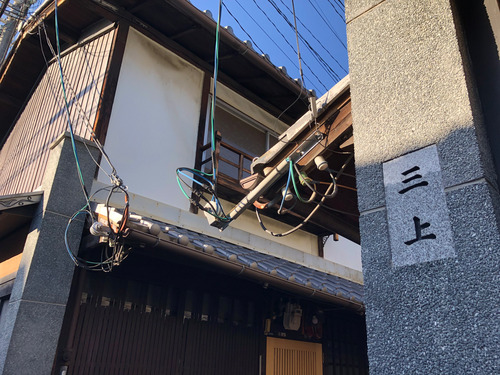 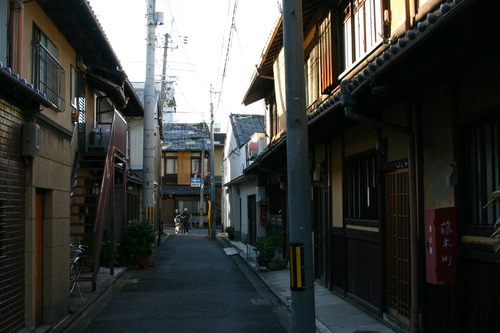 Kyoto is characterized by its grid city plan, which is laid out in a grid pattern. Streets called "oji" and "koji" ran east-west and north-south, and stores and houses were built along the streets, but the central part of the plot surrounded by the streets became vacant. Therefore, a path, or "roji," was created to enter this space. Along this small road, more and more buildings were built, and more people began to live there.

Many of the roji are blind alleys, and the entrances to the alleys from the main streets are gated or have nameplates of the residents. A roji in Kyoto is not just a narrow street, it is a living space and an extremely internal existence. The widths of the roads vary from those where people can't pass each other to those where cars can pass each other.

Also, the end of an alley that is penetrated and opened up as a passage is called a "zushi." Unlike roji, zushi are open to the public. They are especially concentrated in Kamigyo-ku, north of Ichijo Street, and half of the 100 zushi in Kyoto City are located in Kamigyo-ku.

The reason for this has to do with the fact that this area was originally outside the scope of Heian-kyo. In the Heian period, the road at the northern end of the city was Ichijo Street, and the area north of that was undeveloped. However, as urbanization progressed in the Middle Ages, north-south roads such as Karasuma Street, Muromachi Street, and Horikawa Street extended northward, houses were built along these roads and people came and went in each town. The east-west roads that were built to connect these north-south roads were called zushi.

Zushi was shaped by people's daily lives, and there are many pieces that retain the image of the craftsmen and cultural figures who lived in Kyoto.

Monya Zushi, located on Itsutsuji-iru, Omiya, used to be a blind alley, but a warehouse that supplied textiles to the Imperial Court called Monya opened the street to Omiya Street. In the middle of the zushi is the Mikami Family Alley, and at the far end is the Mikami Family, the only remaining weaving company. The 140-year-old row houses on both sides of the alley have a history of housing Nishijin weavers.

"Yamana Zushi" is located on Imadegawa-agaru, Horikawa, and originates from the residence of Yamana Sozen, who was the commander-in-chief of the western army during the Onin War. The area came to be known as "Nishijin (Western Position)" because the western army set up camp here.

Other anecdotes are hidden in the casual paths, such as "Kano Zushi," where Motonobu Kano lived, at Ogawa Higashi-iru, Motosenganji, and "Honami Zushi," where Koetsu Honami was born, at Imadegawa-agaru, Aburakoji.

The Imadegawa showroom is located in an area where zushi is concentrated. We hope you will enjoy walking around the area when you visit us.

Imadegawa Showroom (Open from 14:00-17:00 on Tuesday, Wednesday, and Thursday)
https://www.shokunin.com/en/showroom/imadegawa.html