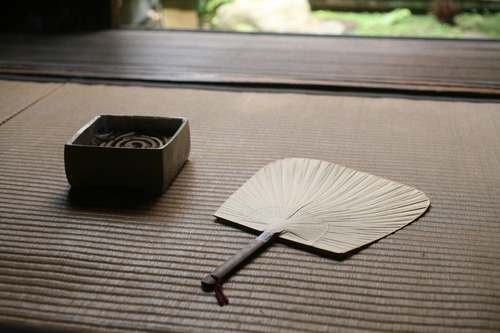 Uchiwa is one of the traditional arts and crafts that reflect the wisdom of the Japanese people in the past, who tried to live comfortably during the hot summer days.

The original form of uchiwa was called "sashiba," which came from China in the Kofun period (mid-3rd century to 7th century), and was initially used by high-ranking people to hide their faces and enhance their mystique, and as a tool to ward off insects. Later, from the end of the Muromachi period (1336 to 1573), the use of uchiwa made of bamboo and Japanese paper became widespread, and they were used for various purposes such as cooling, cooking, dressing, and fashion.

Since the 1960s, the traditional bamboo fan has been shrinking due to the spread of electronic devices such as fans and air conditioners, and the spread of low-cost plastic fans with high productivity. However, we strongly feel that people are beginning to reevaluate the eco-friendly washi paper that produces a gentle breeze and the bamboo handle that fit comfortably in the hand.

In addition to its function of creating wind, the fan has a history of being popular among many Japanese people as a lucky charm for business prosperity. The wind generated by the fan is said to be a meaning of invoking or strengthening the power of the gods, and is also a recommended item to ward off bad luck by blowing away evil spirits.

We have a variety of sizes and lengths of Kurikawa Shoten's Shibu Uchiwa made of Japanese paper, which are durable and long-lasting, made possible by the persimmon tannin coating. Why not bring an uchiwa with you, not only as something to look up to on a hot day, but also as an amulet to bring good luck?