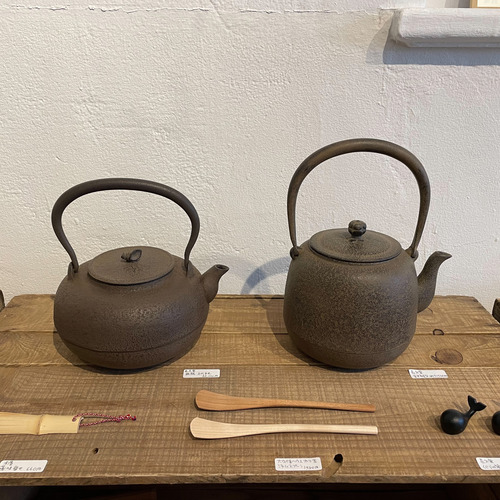 Yamagata casting is called "usuniku-birei" because of its thin wall thickness and beautiful casting surface. Its origin dates back to the late Heian period, about 1000 years ago. It is said to have originated when a foundry worker who served with Minamoto no Yoriyoshi's army dispatched by the Imperial Court during the Former Nine Years' War discovered that the sand of the Mamigasaki River and the soil around Chitose Park were ideal for casting molds, and several foundry workers remained in the area.

Originally used to manufacture armor for warfare, the appeal of Yamagata casting is its thin, delicate shape, and precise dimensions, and it has developed into a major production center, producing iron kettles, tea kettles, and other handicrafts, as well as large castings such as lanterns and bells, centered in the town of "Domachi," a town of casting craftsmen.

On the other hand, because of the craftsmanship that has lasted for a long time and the idea that "manufacturing is the aim and business is not good," there have never been large-scale wholesalers in the production area, and it is a characteristic of Yamagata casting that all manufacturing is done at home without a division of labor. This dedication and inquisitiveness has been beautifully sublimated, and the beauty of form and quality has been passed down to the present day, to the point of elevating everyday items to the realm of art.

Chobundo's Tetsubin is designed to bring out the beauty of the cast surface in a plain design that makes the most of the characteristics of Yamagata casting. Natsume, which has been made for over 50 years since the first generation, and the traditional flat round shape of the ancient hiramaru. Both have a capacity of 1.5 liters, making them easy to use, and can be used with care and affection for a long time. We currently have two of them on display side by side in our Ginza Showroom, so please take a look when you stop by.