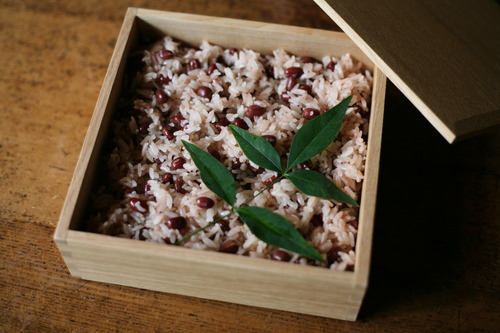 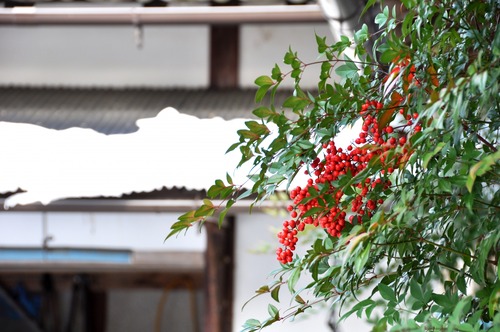 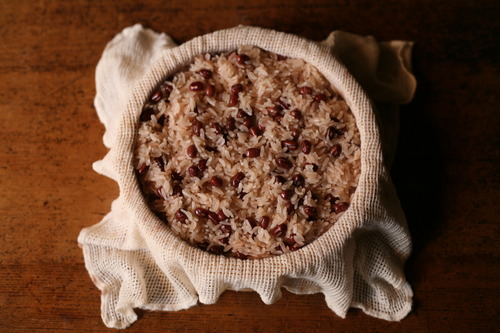 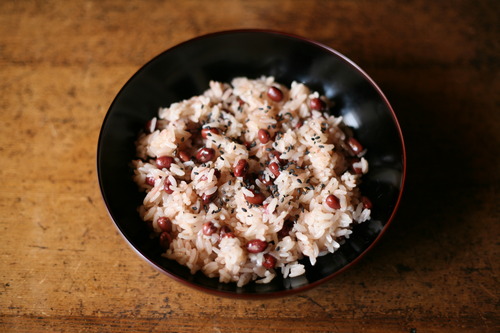 As we were packing the freshly made sekihan (red rice) into a stacked box and were about to fold the nandina trees in the garden, it occurred to us. Why do we garnish sekihan with nandina leaves in Japan?

Nandina is an evergreen tree whose green leaves can be seen throughout the year, and it bears small light-red berries in late autumn and early winter. The contrast between the fresh green and the vivid red can add color to a winter garden, and it has been loved as an ornamental garden tree since ancient times.

The name "nandina" is believed to be auspicious because it means "to turn around a difficulty," and the red berries were believed to have the power to keep away evil. In the Edo period, in the encyclopedic dictionary "Wakan Sansai Zue" compiled by Terashima Ryoan, the plant was introduced as a fire repellant, saying, "plant this in your garden to prevent fires."

The idea that the color red can ward off evil spirits has been believed in since ancient times, and akagome, the original form of sekihan, was once customarily offered to the gods. In addition, the combination of the auspicious red leaves of nandina and sekihan, a symbol of food for celebrations, can be seen in the Edo period description of "laying nandina on a stacked box and filling it with sekihan," suggesting that the combination already existed at this time. However, this was not only to ward off bad luck or as a good omen, but also for practical reasons, as the ingredient "nandinine" contained in the leaves of nandina suppresses the spoilage of sekihan by hydrogen thianide, which is generated when it reacts with the heat and moisture of nandina. Although nandinine is inherently toxic, it has the property of exerting sterilizing and antiseptic effects in small amounts.

Nowadays, instead of fresh nandina leaves, you can see illustrations of nandina printed on packages of sekihan, or films in the shape of nandina leaves. When you unravel the combinations and designs that have blended into our daily lives, you will be amazed at the wisdom of life that our ancestors have developed.