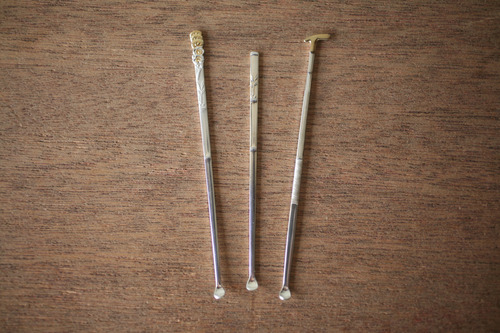 Earpick is generally defined to be a thin rod-like tool specially used to pick inside the ears where human fingers cannot reach. The first earpick in Japan originates from ornamental hairpins. A person named Tonan Takahashi invented it by flattening the end of these hairpins during the Edo period. There remain many antique hairpins which also serve as earpicks, and thus, functional and decorative. During this period, there existed jobs specializing in picking ears using earpicks that were called “Mimiaka-tori” and such professionals also existed in India. Wooden earpicks were excavated from the remains of Prince Nagaya’s mansion, which was built at the beginning of the Nara period, yet many suggest that it was possibly used as a stop peg and not an earpick. In fact, it is very difficult to trace back the origins of modern earpicks as there exist few studies related to this tool, and since wooden earpicks are most likely destroyed before they are excavated.

Such a mysterious tool is still cherished by many people, including Japanese, as almost all households in Japan have at least one earpick in their house. Today, there are more than 180 earpicks in the market that vary in form, design, and material according to the production center. Though most are made out of wood or bamboo, there also exist earpicks made of paper, plastic, and rubber. There are also metallic earpicks that are not only used as daily necessities but also as ornaments, as many were sold as antiques in the market in Europe during the 18th century. The Silver Earpick produced at Miyamoto Shoko, the first silverware specialty shop in Japan that was founded in 1880, not only is fine and graceful, fully expressing the beauty of manual work, but it also is strong and antibacterial in quality. The end is designed to be round as to provide maximum comfort to users, and since silver is soft and highly heat-conductive, it is truly gentle on human skin and does not cool down as easily as many metals do. They are truly masterpieces that represent Japanese craftsmanship conveying the mysterious yet attractive tool to its fullest extent.