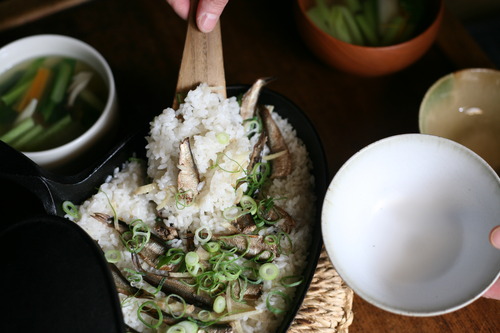 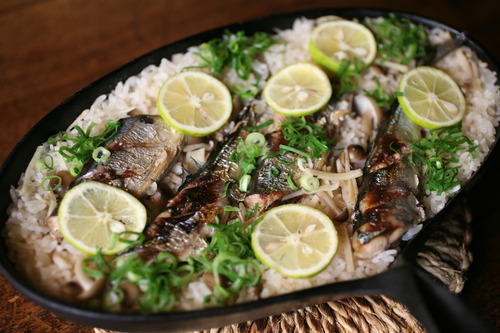 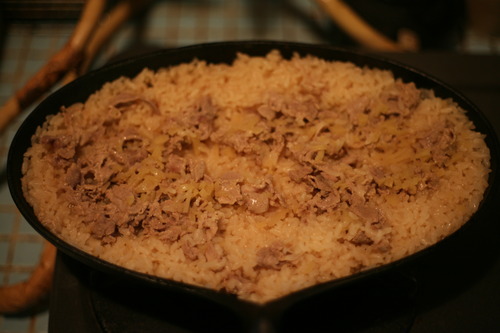 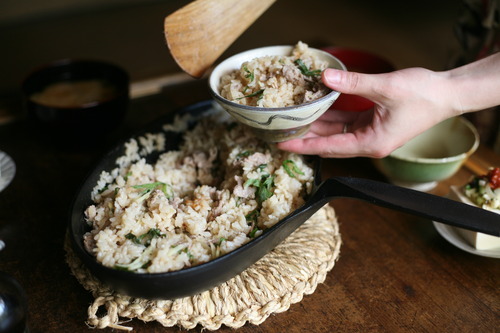 Rikucho Ogasawara's Fish Pan serves various kinds of dishes. Not only could it serve fish dishes, as the name suggests, but it could also serve pasta, meat dishes, and fried foods. Its unique shape allows the users to directly bring and place the plate on the dining table, easing distribution, while its material supplies the users with iron content as well.

Other than the aforementioned dishes, the fish pan may serve different kinds of takikomi-gohan, which are rice seasoned and cooked with various ingredients, such as vegetables and seafood. Takikomi-gohan has been made in Japanese households since the Nara period, which was initially made when they had an insufficient harvest of rice. In other words, people tried to save rice by adding other ingredients that were sufficiently produced.

"Awa" rice is considered the origin of takikomi-gohan, a dish composed of rice and millet. "Kate" rice was also made during this period of time, which similarly served the purpose to add grains and vegetables to rice.

In the Edo period, people increased their cooking repertoire, as more types of takikomi-gohan were made, such as crab rice, bamboo shoot rice, and green pea rice. Since this period, takikomi-gohan was no more a dish that merely replaces the insufficient amount of rice, but a menu that expresses the different seasons and represents the local characteristics.

In fact, 80 years ago, 5 popular types of takikomi-gohan were named to represent 5 major regions in Japan: Kayaku-meshi from Osaka; Chushichi-meshi from Saitama; Sayori-meshi from Gifu; Usuzu-meshi from Shimane; and Fukakawa-meshi from Tokyo. Thus, a dish once used for emergency occasions now serve for various purposes.

Rikucho Ogasawara's Fish Pan well suits to serve different kinds of takikomi-gohan. How about experiencing the various combinations of rice and ingredients according to seasons and regions with the fish pan?