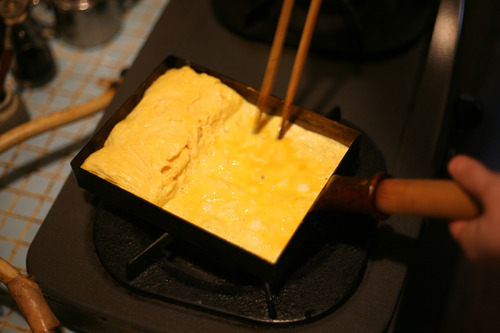 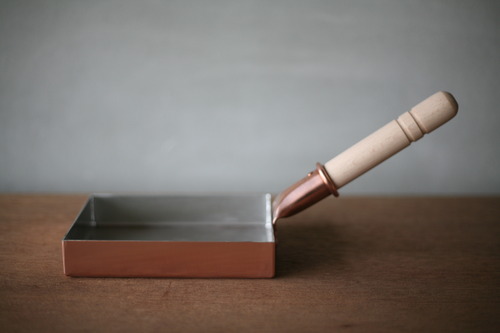 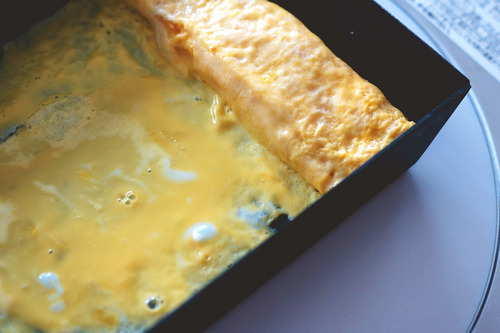 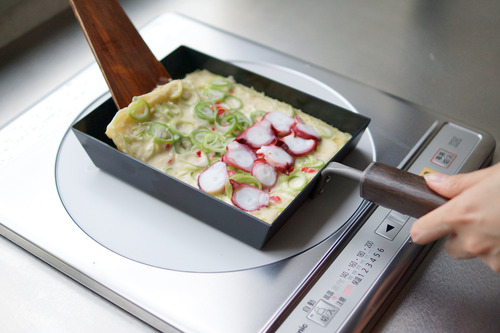 [Tamagoyaki Made with Special Tools]

Tamagoyaki (Japanese rolled omelet) has been used as a type of sushi since the Edo period, and is now popular as a side dish for lunch boxes. The tamagoyaki that we are accustomed to eating is different depending on whether it is sweet tamagoyaki, tamagoyaki with soup stock, or the taste of the family passed down from region to region or generation to generation. Kanto style is made by folding the egg in half and cooking it thickly, while Kansai style is made by rolling the egg into thirds.

Nakamura Douki's Tamagoyaki Pan has tin baked on the inside to make the oil blend in easily, and have excellent antibacterial and thermal conductivity. FD Style's Frying Pan Tamagoyaki is made of iron and processed for easy cleaning, which has a thickness of 2mm, thicker than usual. Both of them can easily transfer heat evenly and cook an omelet that is fluffy all the way through. 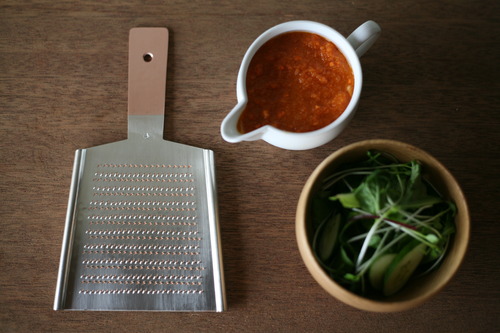 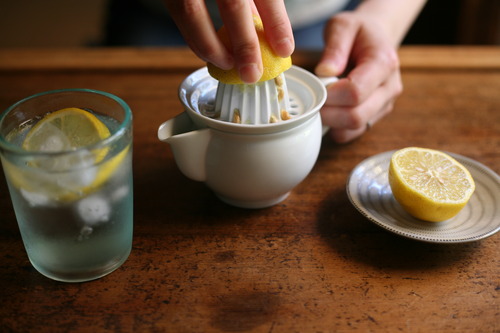 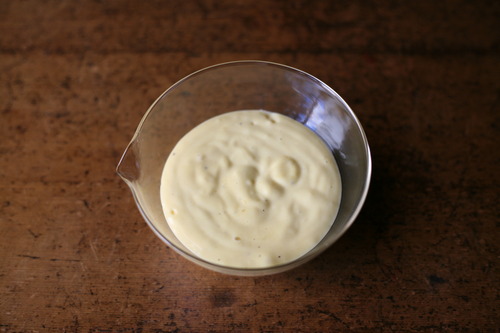 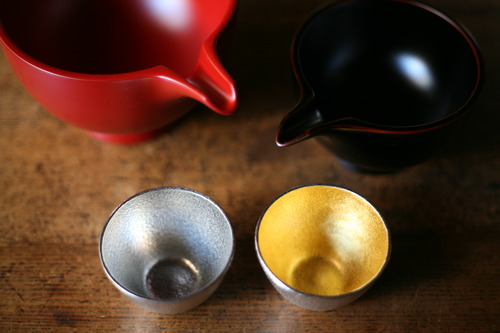 Japan's first dressing, French Dressing, was released by Kewpie in 1958. Since then, various types of dressings have been introduced to the consumers and have supported Japanese households as an accompaniment to salads and other side dishes.

With the dawn of the Jinmu economy, which marked the beginning of Japan's rapid economic growth, the dining scene in Japan changed drastically - it was during this period that dressings made their debut.

Following a drastic change from the usual one-serving-per-soup meal with pickles in a common bowl, with the introduction of Western-style dishes and handmade Western food, there were more and more occasions where the whole family enjoys sharing the food together. The dining table became a more active place for family gatherings, and dressings became a part of everyday life as a way to add color to such a space.

Seaweed, daikon, potherb mustard, and sweet potatoes are some of the ingredients that are characteristic of Japanese salads, and sesame oil, rice vinegar, miso, soy sauce, ginger, and lemon are often used in dressings. If you look around Japan, there are many excellent products that use local ingredients and offer taste, aroma and appearance as well. 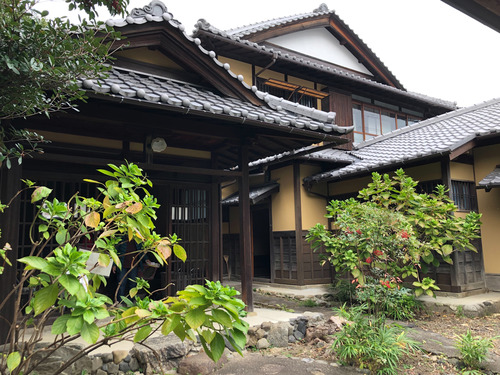 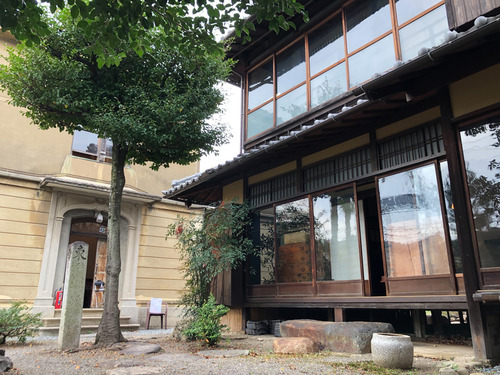 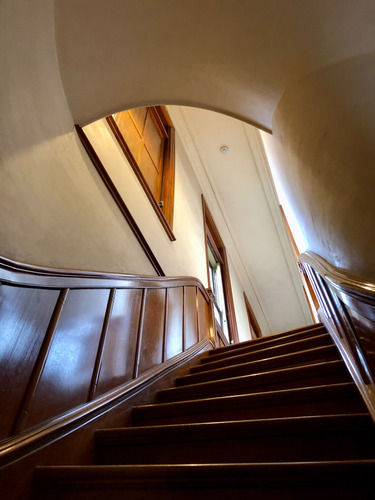 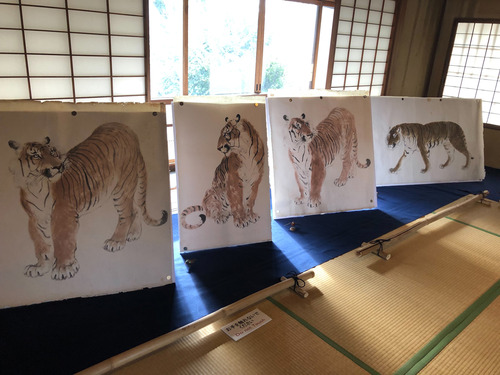 In Kinugasa, Kita-ku, Kyoto, there is the Okoku Bunko, the former residence of Konoshima Okoku, a Japanese-style painter active from the end of the Meiji period to the early Showa period. Here, you can see more than thousands of artifacts from Okoku's collection, including calligraphy, paintings, poetry, and books from the Middle Ages to the modern era, as well as works and studies for practice. The place consists of three buildings: a Japanese-style building where Okoku lived, a Western-style building used for exhibition and reception rooms, and a painting room used for creating paintings and teaching his students. All are registered as national tangible cultural properties and registered cultural properties by the government and the city of Kyoto.

Konoshima Okoku was born in a merchant's house in Sanjo Muromachi, Nakagyo-ku, Kyoto in 1877. At the age of 16, he entered the painting school of Imao Keinen, a Japanese-style painter who was a major figure in the Kyoto art world at the time. In the tradition of the Maruyama-Shijo School, he made thorough sketches and left a series of large paintings, mainly of animals, in his early years. Since the opening of the Kyoto City Zoo in 1903, he has been going to the zoo to sketch, and the zoo even gave him an annual passport. At the same time, he studied Chinese poetry under the Confucian physician Yamamoto Keigu, so he was well versed in historical events and facts, and expanded his painting style to include portraits and landscapes.

When the Bunten exhibition was established in 1907, he won prizes in consecutive years from the first to the sixth, and became the favorite of the Bunten exhibition, splitting the popularity of the Kyoto art world with Takeuchi Seiho. At the same time, however, he was subjected to harsh criticism, including a scathing review by Natsume Soseki of his sixth prize-winning work, "Cold Moon," but Okoku remained silent and deepened his own world.

Since Okoku moved his residence to this area, Kaneshima Keika, Yamaguchi Kayo, Ono Chikkyo, Fukuda Heihachiro, Domoto Insho and others also moved to the area, and the Tojiin Temple in Kinugasa has come to be known as the "Painter's Village." Okoku's former residence is a symbolic building of the Painter's Village, as the painters who moved there brought a new style to the Kyoto art world.